A pair of century-old buildings in Lethbridge’s Chinatown are now protected from demolition or changes to their historic character.

Alberta’s Minister of Culture and Multiculturalism, Leela Sharon Aheer, was on hand Wednesday to announce Provincial Historic Resource designation has been given to the Bow On Tong and Wing Wah Chong buildings on 2nd avenue south.

She says both buildings tell stories about Chinese immigrants and the Chinese community in Lethbridge 100 years ago, adding “it feels really amazing to be able to participate in something like this and protect the Chinese heritage” in Lethbridge.

Tai Sing Wing Co. was built in 1919 as a grocery store and lodging house and became the Bow On Tong Co. Apothecary in 1926. Lethbridge’s Wing Wah Chong Co., also known as the Manie Opera Society Building, was occupied by a number of Chinese-Albertan businesses while the basement was also used as residences for Chinese immigrants.

The Leong family owned and operated businesses in the two buildings now under provincial protection.

Albert Leong, who still owns them, was born in the Bow On Tong 78 years ago. He says it means everything to have the buildings and his family home restored as they show how people lived. He says if the buildings were gone “so would many of the stories of Chinese immigrants in Lethbridge.” 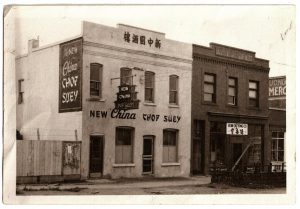 Justice Minister: there will be fines for those who disobey social gathering measures