It was quite the evening Saturday (June 13) with some wild weather across parts of southern Alberta.

For the most part, the City of Lethbridge dodged the real nasty stuff with only some thunder, lightning, and a bit of rain. However, that certainly wasn’t the case for many other areas nearby.

A low pressure system clashing with a warm and humid airmass was the fuel for some very strong thunderstorms. Conditions started to deteriorate around 5:30 pm as storms became to move up from Montana.

A few hours later several reports from storm chasers in the region showed a supercell thunderstorm near Warner was showing rotation and not too long after that tornado warnings were issued. Alberta Emergency Alert also sent out a warning over radio and wireless devices at 7:39 pm.

Those tornado warnings went off an on for nearly two hours as the supercell moved north through Taber and into the Vauxhall, Hays, and Brooks areas. There are no reports of any damage from the twisters as most information indicated the funnel clouds were spotted over open fields. At this time, Environment Canada hasn’t confirmed an touchdowns,

In the meantime, another line of severe storms popped up along the foothills, triggering weather warnings of their own. Those storms targeted Calgary, pummelling parts of that city with large hail. There are several reports on social media showing hail piled up like snow in yards, siding on houses destroyed, car windows completely smashed out, and flooding along Deerfoot Trail. 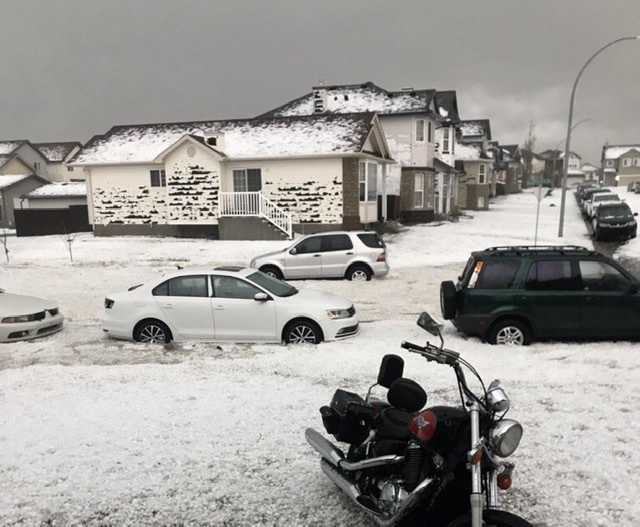 Homes and vehicles in Calgary were hammered and damaged by large hail Saturday night. Credit to Candeena Langan on Twitter.